The most centrally located junction of Sweden's seaside capital has received a landmark worthy of it – a golden bridge that emphasizes the beauty of historic Stockholm's architecture. The golden color was created with a totally unique shade of paint, developed specifically for the bridge with Teknos' unrivaled expertise.

Completion of the bridge a significant event

The renovation to create the new Slussen has been an extensive and multi-phased project. As one of the first visibly completed parts, Slussen's new bridge was inaugurated in fall 2020 by the Swedish royal family during a prestigious event. The inauguration of the bridge was a significant milestone in the area's development project for the city of Stockholm.

The arrival of the bridge as sea freight from its country of manufacture, China, was an event closely followed by Stockholm and international media. The bridge traveled 20,333 kilometers and 70 days in variable and difficult marine conditions.

Teknos' bridge coating system has been designed to last many years without maintenance, thus meeting the requirements set out by the Transport Agency of Sweden. The steel bridge was coated in China to full corrosion and weather protection standards, which protected the bridge during the long sea voyage. In Sweden, in its final location, the bridge received its top golden layer of paint. Teknos supported the entire surface coating process in both locations, China and Sweden.

Central to the new bridge’s look is its unique golden color, which is where the nickname given by the Swedes to the bridge, "Guldbro", golden bridge, originates.

The City of Stockholm and firm of architects, Foster + Partners, carefully defined the golden color so that the bridge is in harmony with the surrounding scenery throughout the year. "A metallic color is a natural choice for a steel bridge, and as a warm shade, gold sits very well also in the cold winter scenery," explains Spencer de Grey, Head of Design at Foster + Partners, the architects of New Slussen.

Spencer also emphasizes how important it was to define the bridge color in terms of its historical setting. To select just the right shade of gold, the orange and yellow facades of the Old Town were taken into account. In addition to the shade, the right texture was also an important factor, because it determined the bridge's reflective characteristics. 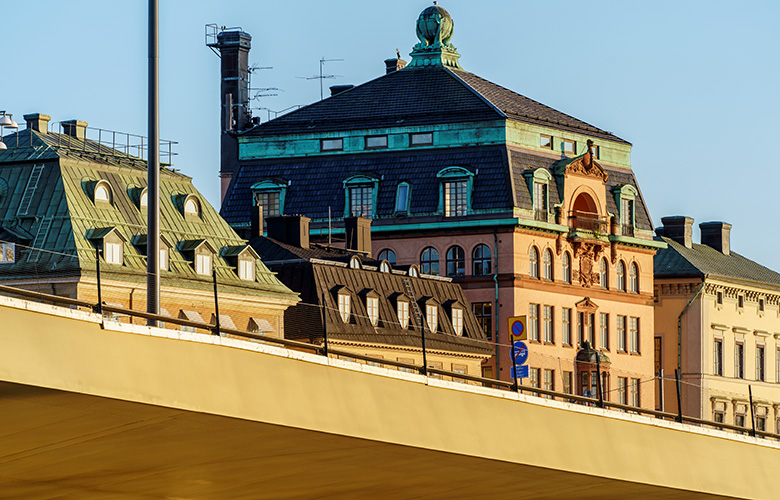 Suitable shade was ensured on the spot

At the start of the project, potential paint suppliers were presented with a specific model of a gold effect paint, from which several paint manufacturers started to develop alternatives. A lot of time and effort were spent on the selection of color, the firm of architects and the City of Stockholm went through numerous different shades of gold and textures.

Charlotte De Ferry Foster, Partner at Foster + Partners, describes how the selection process progressed: "Several different paint suppliers' paint samples were compared in the final location of the bridge to verify the shade in its real environment. This was to ensure that the shade of the bridge would be certain to fit the entire material palette of the city context, as well as the surfaces surrounded by the water, for example its wood elements and the different shades of granite." 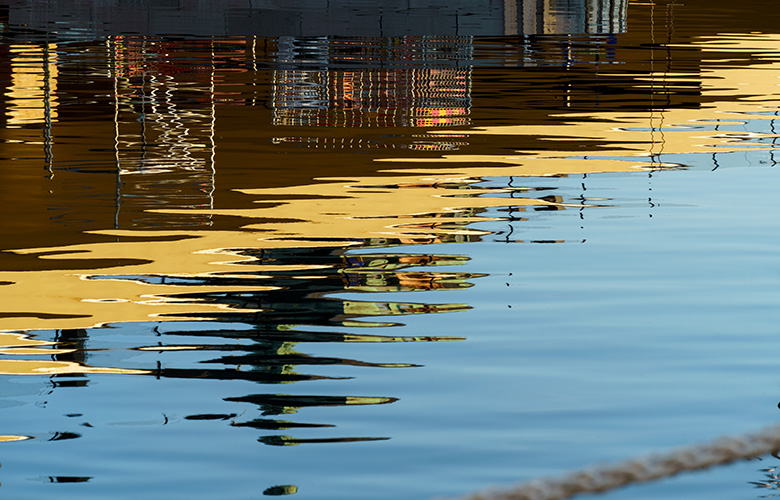 At the end of the evaluation and selection process, Teknos' paint sample stood out and was therefore selected as the approved color. "The selected coating is not an even, traditional RAL or Pantone color, it is much more. Its characteristics facilitate the kind of glow that we were seeking against the surface of the water surrounding the bridge," Charlotte rejoices.

Although searching for different solutions for the needs of customers is very normal, Antti Karkola, Head of Teknos Research and Development, emphasizes that making this kind of a gold effect paint for a large piece of infrastructure is in itself an exceptional task, the likes of which he has not come across during his career. Because the gold effect paint has been carefully customized to the precise wishes of the customer, the Teknos team remained in particularly close contact with both the City of Stockholm and the firm of architects.

In normal color shade development, a spectrophotometer can be used to provide a generic assessment of the correctness of the color. In the development of a unique gold paint however, there are challenges. "The shade of this type of paint cannot be measured because no objective shade comparison can be found for it. The shade has been created purely "by sight", Karkola clarifies. 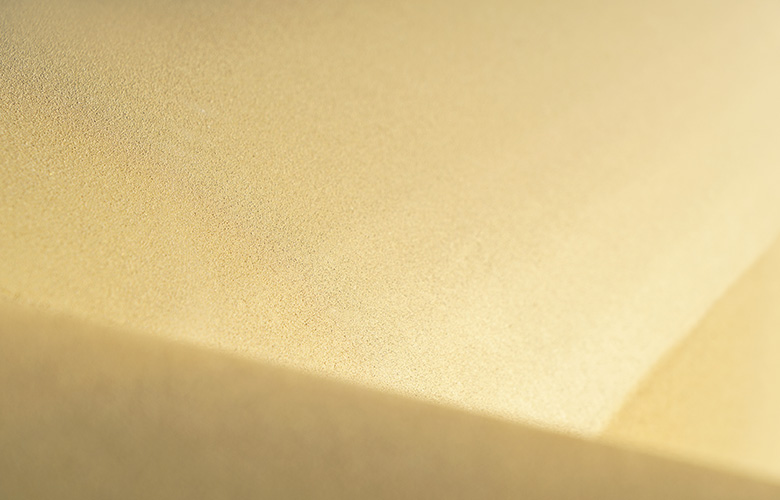 Another special challenge was connected with the long duration of the project – Teknos joined the project in 2014, and the first part of painting the bridge's gold layer took place in 2020, the finishing painting in 2021. In terms of production, this means making several different paint batches over the years, from the test paints to the final, larger paint delivery. "Adjusting the shade to the correct one and maintaining the same quality from one batch to another has required more from product development and also from production. In practice, all manufactured batches have been personally approved with regard to the shade," Karkola explains.

Golden Bridge is a central landmark

After its completion, the Golden Bridge is one of the most visible parts of Slussen's massive renovation. "The selected color is very special, as it should be for such a significant bridge in its historic environment. Gold gives the bridge its own identity, as a color it is very symbolic. People of Stockholm have understood this and embraced the bridge," Spencer says happily. "The golden bridge acts as the central point of the capital."

“This project was an excellent cooperation experience with Teknos. The fact that the Teknos R&D team went the extra mile to achieve the end product and that we were able to utilize the expertise of Teknos professionals was fantastic and something entirely new," Charlotte de Ferry Foster says. Praise is also heaped on the project team gathered by the City of Stockholm, which made it possible to realize the vision intended by the architects, and which facilitated success. "I am sure that we all enjoyed both the challenge and the end result of the cooperation. This has been wonderful,” Spencer de Grey adds.

Slussen's bridge is a special reference also for Teknos people, who have given their full commitment to this unique project, both with regard to color development and painting consultation. 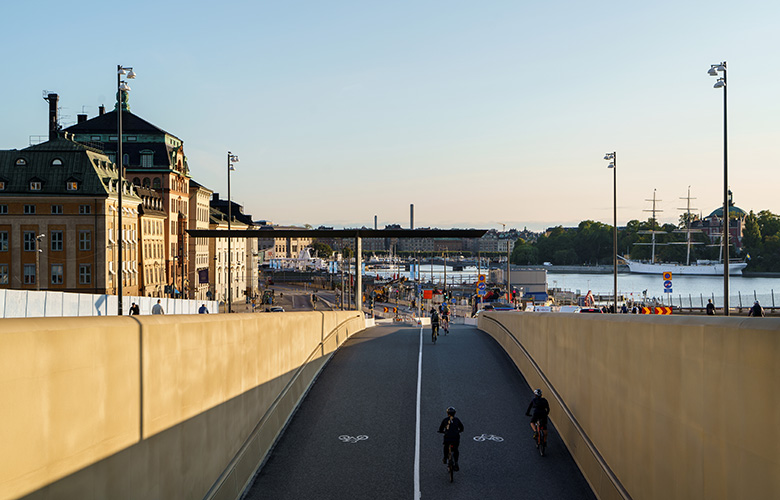 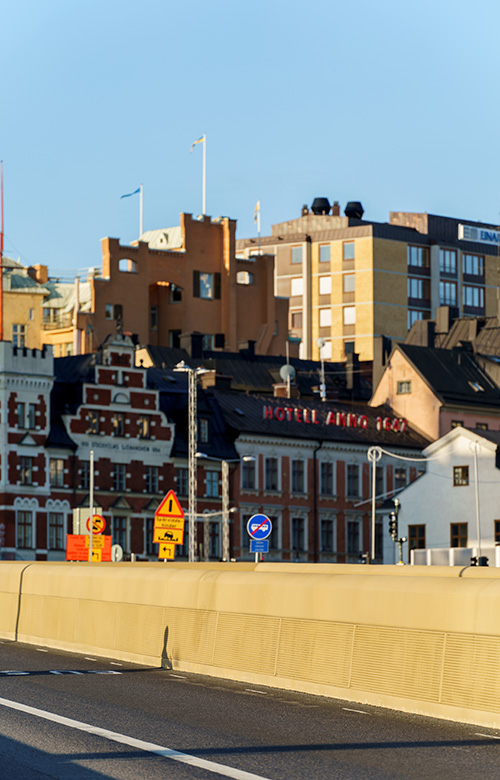 "Gold gives the bridge its own identity, as a color it is very symbolic. The selected color is very special, as it should be for such a significant bridge in its historic environment."
Spencer de Grey, Head of Design at Foster + Partners, the architects of New Slussen

"The fact that the Teknos R&D team went the extra mile to achieve the end product and that we were able to utilize the expertise of Teknos professionals was fantastic and something entirely new,"
Charlotte De Ferry Foster, Partner at Foster + Partners

"The shade of this type of paint cannot be measured because no objective shade comparison can be found for it. The shade has been created purely "by sight"
Antti Karkola, Head of Teknos Research and Development 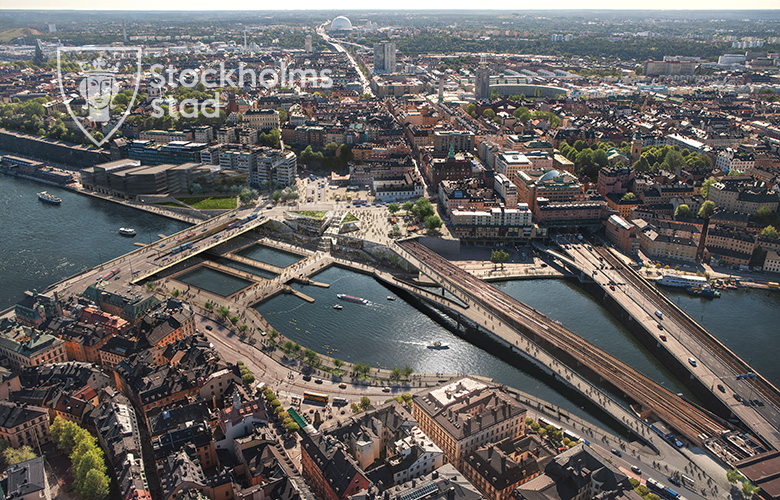 The importance of Slussen as a core area of Stockholm is significant, and its history goes far back to the 17th century. The infrastructure of this area of capital with the heaviest traffic was last renovated more than  80 years ago. Slussen acts as a key link between the islands of Old Town and Södermalm, and in its location, the saltwater and freshwater of the surrounding bodies of water merge.

The renovation of the new Slussen was an extensive and multi-phased project. The main focus of renovating the area, in addition to controlling traffic, was to make the waterfront pleasant again so that the city's inhabitants can enjoy the proximity of the sea in parks and restaurants, walking as well as cycling.

During the project, Teknos' agile and global working methods showed their practical benefits. The Teknos sites in Sweden and Finland worked in close cooperation in the development of the unique gold color.

Teknos supported the entire surface coating process in both locations, China and Sweden. Teknos China was closely involved in the project and delivered the 5-layer system for the Chinese bridge manufacturer CRSBG. The final layer of the painting system was undertaken by the Swedish coating company IPM Norden. When the project progressed to the phase of painting the sixth, golden layer, local cooperation between Teknos Sweden and IPM Norden had an important role.

With the Teknos way of operating, the various stakeholders of challenging construction projects receive timely and local support precisely where it is needed at each phase of a project.

The appearance of the end result was also greatly impacted by the painting technique. The special composition of the gold paint brought its own challenges, requiring special skills and equipment from the painters. Painting was undertaken by Swedish IPM Norden's true professionals who have years of experience in painting bridges.

"We are talking about a very special paint that has special fillers, meaning that normal spraying equipment cannot be used. Spray painting this size of a bridge with gold liquid paint is like painting a giant artwork – real craftmanship, where the painting technique also has an impact on achieving the right metallic effect. ", Göran Sigfridsson, Head of Industrial Painting Solutions at Teknos Sweden, emphasizes, being involved in the project since the beginning.