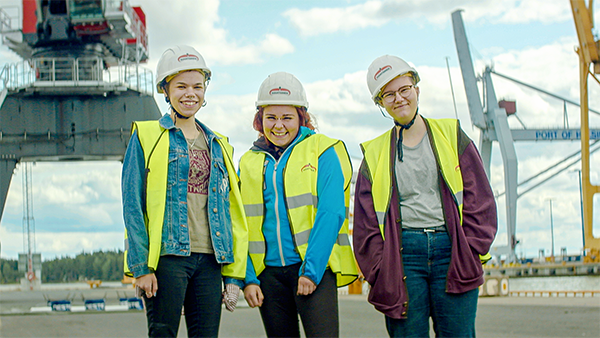 Neste and Mantsinen Group have joined forces to tackle a difficult challenges: the social exclusion of young people. The problem is vast as one in five children in developed countries lives in poverty*. Through the Zero Exclusion campaign, Neste and Mantsinen have pledged to get the voices of these young people heard and raise funds to tackle social exclusion. The campaign brings together young artists from Finland, one of the leading international art galleries, the world’s largest hydraulic harbor crane and Teknos paints.

The Zero Exclusion campaign features 42 paintings by three young artists created using a 300-tonne harbor crane fitted with specially-designed paint brushes. The paintings have been painted with Teknos waterborne Biora 7 acrylate coating. Some of the paintings are also painted with Neste MY Renewable Isoalkane based coating, which Teknos developed especially for the particular campaign.

The artworks were produced in collaboration with the internationally acclaimed American art gallery, Albright Knox. The paintings will be sold and the proceedings donated in full to the Finland-based charity Hope ry. The aim is to raise €50,000 to prevent the social exclusion of young people. Teknos supports the cause, and has bought one of the paintings.

“The challenge of social exclusion is huge and tackling it requires a collaborative effort – this is why we are inviting companies to participate. Every young person, no matter where or how they live, should feel that they are an important part of our society. One of the objectives of the Zero Exclusion campaign is to give an unconventional and inspiring voice to the participating young artists,” says Heidi Peltonen, Manager, Sustainable Partnerships at Neste.

“The founders of our company come from modest backgrounds. We want to show that anyone can achieve success, as long as they are given opportunities for self-fulfillment. Once you have received a helping hand along the way, you want to help others too,” says Mia Mantsinen, CEO of Mantsinen Group.

As a family and entrepreneur-driven company it is important for Teknos to support and involve future generations. Teknos supports young people’s working skills competences, employment and entrepreneurship education in Finland as part of its corporate responsibility program.

The theme for the art work is hope

The common theme of the 42 artworks is hope. The young artists have themselves received support from Hope ry in the past.

“The three of us wanted to participate in this project because we felt it was our turn to give something back for all the help we have received. I love art, and painting with the massive crane will forever remain an experience I will always remember. I hope my work inspires companies to take action and help other young people,” says artist Miia Kuittinen.

The artworks are on display at Bio Rex, Helsinki, between 4–22 December 2019 and can be bought from the Zero Exclusion campaign site.

Zero Exclusion is part of the Journey to Zero project started by Neste to encourage its partners to take part in creating a healthier planet for our children. Teknos waterborne paints were used to create the artwork for the campaign, and in addition, Teknos developed a Neste MY renewable iso-alkane coating for the project, which was used in some of the artwork.

Support the cause and buy one of the artworks