From operating a pearl mill to international sales

For most of us 21.4.2020 was just an ordinary working day – for Group Commercial Director Pekka Paronen, that day marked a new milestone – 40 years in the service for the company. During his career, Pekka has worked in both paint production and with international sales. 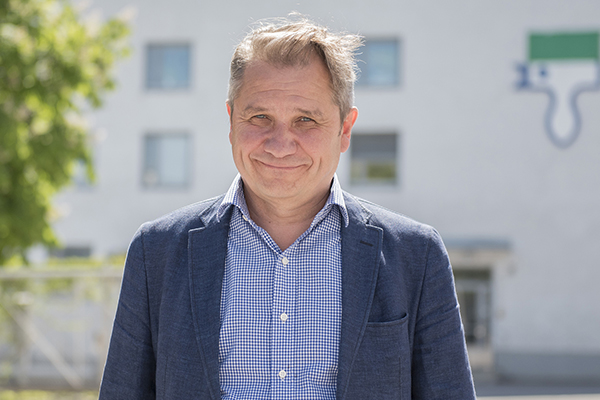 Positive career development, challenging and versatile tasks and the good working atmosphere at Teknos are reasons why Pekka has been very satisfied with Teknos as an employer.

“Working life and work was quite different 40 years ago than it is now. Back then, the turnover rate was high. Personally, I strove - and have continued to strive - to do my job as well as possible. I guess you could describe me with the word conscientious.”

That is probably why Pekka’s career has progressed so well. When Pekka started working at the pear mill at Teknos in Pitäjänmäki, he knew nothing about coatings or paint manufacturing. After working in paint production, Pekka received a job at the tinting department, where he worked for a year and a half. Then he was moved to technical service, and later to sales.

“At that time, technical service was the best place in the house! It felt great to pull on a white jacket after the blue collar. And now I would like to point out that everyone who works in manufacturing does a very important job. But I do not think that I would have been happy working only at the pearl mill for 40 years in a row.”

Positive career development and new types of challenges are the reasons why Pekka has enjoyed working at Teknos for so long. Of course, it has also been influenced by the good workplace atmosphere and nice people.

"I can honestly say that I have been very satisfied with my employer, and have always come to work happy.”

If there is anything that Pekka regrets, it is the fact that he did not study more when he was younger.

"In addition to my work, I went to evening school, graduated from high school and vocational business school, but in retrospect, it would have been useful if I had a better understanding of business-making and especially international trade”.

Teknos started to internationalize heavily during the 1990s, and many learnings have occurred on that path.

"What I have learned the hard way is, for example, that in different cultures practices differ significantly but in the end the results might be exactly the same.”

In addition, Pekka has noticed that the competition for customers is even fiercer. A “great product” alone is not enough.

“To be honest selling coatings is not rocket science. Therefore, added value arises from other things, such as services. We have always been excellent at highlighting the technical features of products, but we would need to improve our negotiation and sales skills. Customers are challenging us in new ways and the demand for quality is higher than before. On the other hand this also is a good thing; achieving the best possible win-win situation in that kind of circumstances is of course very motivating.”

"In that sense, Teknos' new customer-oriented CEM-strategy, which aims to sell added value to the customer, is, in my opinion, on the right track."

However, Pekka strongly believes that Teknos long-time competitive advantage should not be forgotten.

“Our trump card has been and definitely still is flexibility and local service. That is what our customers value. When aiming for strong growth, these should not be buried under bureaucracy”.

From upswing to recession

Pekka's career has been full of both great successes and tough times. For example, in 1984, Teknos acquired Tasotuote, a company specializing in automotive paints. The whole company stood in front of new; the technical service for car paints was new and different for everyone at Teknos, and the quality demands much higher than for industrial paints.

"There was a lot to learn."

In 1986, Pekka started to work with powder coatings sales.

“It was a great time for a young salesman. There was a severe boom in powder coatings at the time, and it felt like new paint shops were born all over the place. Sales exploded. Even today, some of the customers are from those times.”

The upswing was however soon hit by recession. After society started to recover, Teknos continued to grow - partly in Nokia's suction.

“There were only two powder coatings supplier in Finland that were allowed to supply Nokia's subcontractors, and Teknos was one of them. That, of course, brought us a lot of extra sales.”

When the long-time Director of powder coatings retired, Pekka rose to head of the department, and later he was appointed as the Head of Powder coatings on Group level. Pekka took on his latest role with the new strategy. Now he serves as Group Commercial Director in the new CEM organization.

During his 40-year career, Pekka has seen three different CEOs, two economic upswings and also two recessions. How does he see the future of Teknos?

“While the current situation is challenging for all businesses, I believe and truly hope that the economy will recover relatively quickly.”

As one of the finest moment of his career, Pekka describes the completion of the new powder coating factory in Rajamäki 2007.

“It was a great moment. I think the factory is I still one of the finest and most modern in Europe”.

“I still remember when we started sales in Poland. The country was in for a new phase: socialism was shaking and the country was just learning the first steps of market economy. And there we were; driving around in a little Fiat car trying to sell coatings, in a very unfamiliar market”, Pekka laughs.

Would there be any other fun stories for the crowd?

"Yes, there would certainly be those stories - but maybe not everything should not be told to the general public," Pekka concludes with a twinkle in his eye.