Teknos makes its paints with help of sun power in Rajamäki, Finland

As a sustainable minded and eco-conscious company, Teknos wants to constantly pay attention to lowering its operational emissions year by year. The installation of solar panels on top of the factory in Rajamäki, Finland, was one concreate examples of how Teknos made its actions towards its sustainability goals. Teknos Group has recently received EvoVadis Gold label for its sustainable continuous efforts.

“Sustainability plays a very crucial role in Teknos strategy and, therefore, installation of the solar panels was an important and concreate action for us to do.” says Petri Holm, Teknos Operations Manager.

Teknos has also participated in a voluntary Energy Efficiency Agreements (Energiatehokkuussopimukset) initiative with several other companies. The aim of the agreement is to challenge all the participating companies to make continuous energy efficiency measures for the good of our planet. As a very concreate example, Teknos has been able to do this, by taking the solar panels into practical use.

“The rooftop of the Rajamäki factory was renovated for the solar panels during the turn of the year of 2022. After that, the installation of the panels happened quickly and easily in just a couple of weeks. However, due to the shortage of components, the initialization of the panels was slightly delayed and got started during early May. After that, the big and powerful solar panels setup has been there on top of the factory, helping Teknos to make the world last longer, also from the energy saving point of view.”, comments Petri Holm on the process.

Each year, the solar panels cover a total capacity of 210kW and produce 180MWh renewable domestic energy for the direct usage of the factory.

“The cooperation with Solar Systems, supplier of the solution, went well even though the shortage of the needed components caused some difficulties for both of the parties.” Holm adds.

In the Rajamäki factory, Teknos produces both powder and liquid coatings. The usage of these new solar panels will cover up to 2% of the energy usage for the whole factory. This means that the majority of the factory’s cooling processes can be run with solar energy only. The 2% annual electricity savings at the factory are comparable with the annual consumption of energy of about ten electricity heated single-family homes.

Teknos decided to start investment in solar energy, as sustainability has been one of the core components of company’s strategy. The techno-economic lifecycle of the panels is around 35 years, during which the panels can lower up to 15 000 kilograms of CO2 emissions every year. This amount corresponds to the emissions of 100 000 km usage of car. Additionally, the info screens on the walls keep reminding employees and visitors about importance of the energy savings with some daily numbers and statistics.

Teknos will now keep on planning and implementing new strategies for energy savings in the future. Similar solar panel installations will become topical when there will be new extensions or other factory projects occurring. 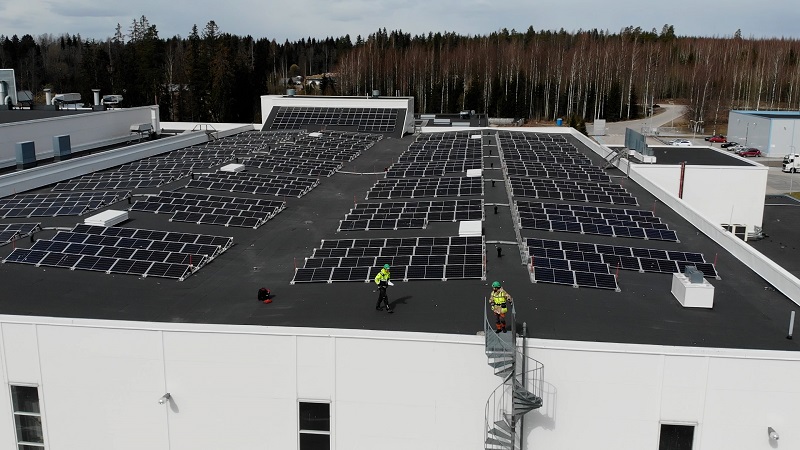